How to Read Code

[...] hardware would become so cheap that 'almost everyone who uses a pencil will use a computer,' and that these users would be able to use 'realiable software components' to put together complex programs. - Journal of Software Practice and Experience, 1972, B. W. Lampson

What are software developers doing when they are writing software? What is their primary task?

Most programming manuals begin with sample code for what is now generally accepted as a universal first program, the infamous "Hello World". Let's look at how the code for "Hello World" looks in different languages.

NOTE: as I show you these examples try to find out where these programs begin and where they halt (or terminate).

(this is the same language you use in Arduino projects, though the Arduino integrated development environment or IDE, likes to conceal this fact from us and give us a more accessible starting point)

Have you noticed any language missing here?

HTML is not a programming language

HTML stands for Hyper Text Markup Language it is therefore a markup language not a programming language.

Markup tags are used to annotate fragments of a document and give them a special context, for example, if we want to make a specific text in our HTML document into a link, we can use the <a> markup tag.

Will create a link with the text my home page that points to the URL http://www.myhomepage.info.

HTML allows us to build documents were fragments are marked-up for the purposes of giving the content a semantic context and a visual style.

Today if you want to have full control over how your HTML documents look like, you must write HTML and CSS.

CSS is not a programming language

CSS stands for Cascading Style Sheets, it is a way of declaring visual styles to be applied to a HTML document.

Doing HTML & CSS is not programming, people that do HTML and CSS are concerning themselves with a document, how to present that information and how it is visually styled.

Javascript however is a programming language. You can write Javascript without HTML and you can write HTML without Javascript. However in the frontend development world you will mostly see them in tandem.

In most modern web applications the HTML serves as a kind of UI and the Javascript carries out the interaction logic (and thanks to nodejs even the backend).

There are literally hundreds of programming languages

Every programming language is a formal language with explicit and precise rules for its syntax, grammar and semantics and unfortunately these rules are inflexible and the computer will be ruthless in expecting you to meet them at every single line you type.

This is what makes programming a really hard skill to get started with. There are few other activities were humans are expected to be so strict in their way of communicating as computer programing, so naturally it takes some habit to get used to this. Seymur Papert, Mitch Resnick, Alan Kay and Bret Victor have dedicated great effort to design systems that overcome some the difficult aspects of programming, we will be seeing some of these later in the course.

This program prints "Goodbye, World!" as is written in a language called Brainfuck.

See it at work using a REPL (Read-Evaluate-Print Loop)

This is the "Hello World" program in a language called Go.

This is the "Hello World" program in a language called Assembly:

People that have a favorite language will criticize another person's choice with the fierce religiosity of those who are convinced that they are completely rational. — "Geek sublime", Vikram Chandra

All computer programs are written to accomplish some kind of task.

When confronted a new piece of code the primary question is always the same: "what does it do?"

tips to read a program

tips to read a program (cont.)

Frameworks and platforms do matter

A C++ program in the Arduino framework:

An another C++ program using the STL: 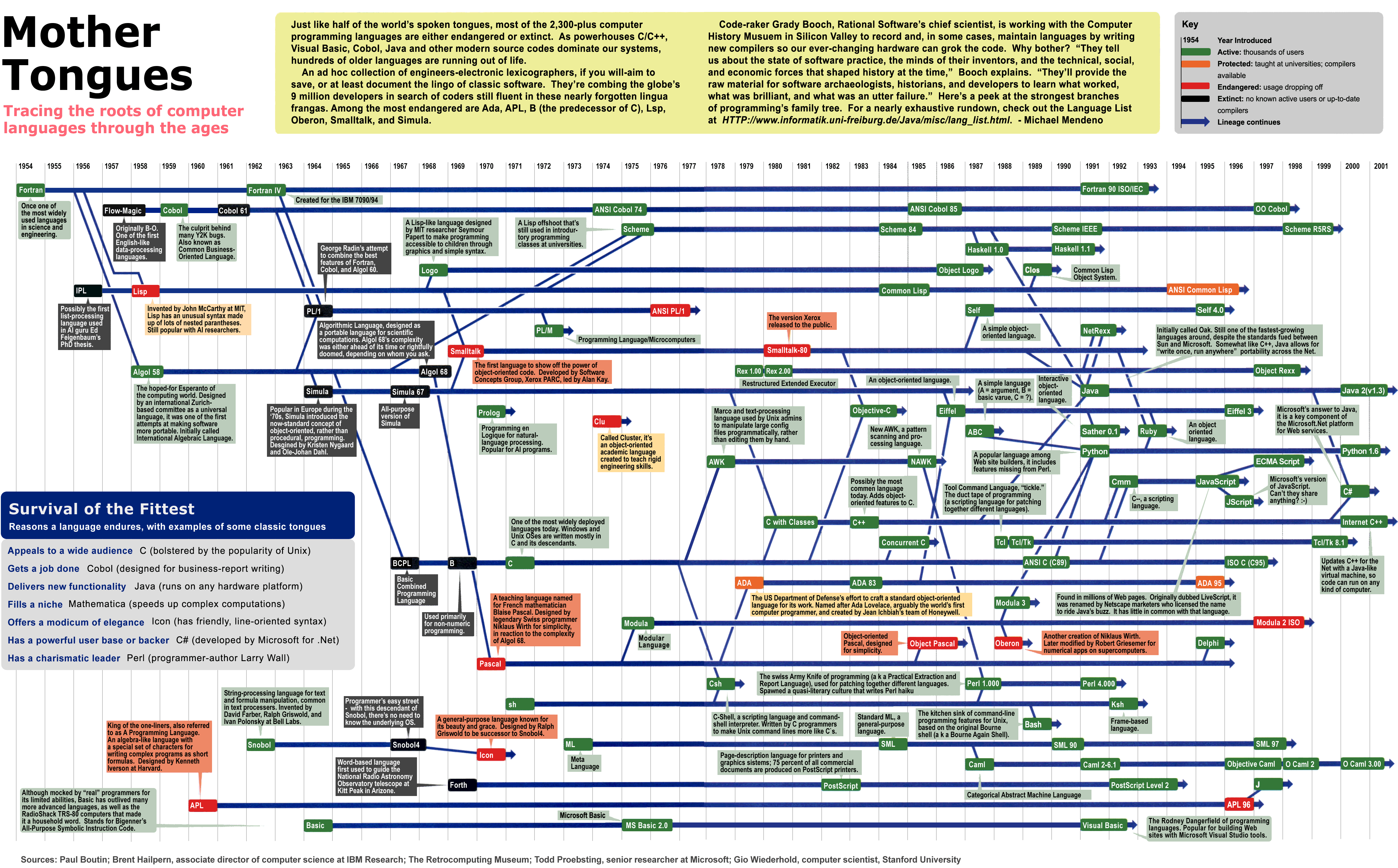 Use comments and pseudocode to make things clear for yourself

Always try to bring the program closer to your language, without getting away from the code, try and rewrite parts of it in a language closer to plain english, or whatever natural language you are more comfortable with.

Calculating a Fibonacci series in python:

Calculating a Fibonacci series in javascript:

Calculating a Fibonacci series in ruby:

code is supposed to be WRITTEN and READ

When you are writing code, you write code for another human, not for machines. Machines cannot understand code the same way we type it.

The real audience of your code, its readers, are the humans that will help you add features, maintain and ship your product. Be aware of this when you are writing code.

Sometimes that other human is in fact the future you. Coming back to a piece of code that you wrote three months ago will require an effort from you to understand it again even though you wrote it yourself.

"Let us change our traditional attitude to the construction of programs: Instead of imagining that our main task is to instruct a computer what to do, let us concentrate rather on explaning to human beings what we want the computer to do" — Literate Programming, 1984, Donald Knuth more info

NOTE: you hardly ever do your thinking in front of code

There is a paradox in the field of computer programming: modern high-level programming languages and community library repositories such as npm essentially hide the internal structures of computers from programmers. Therefore actually very few professional programmers actually know how computers work.

If you think of each line of code as a component like a brick in a building, software systems are the most complicated things that humans have ever built: Windows 7 for example, has some 40 million lines of code (LoC). Each of these lines of code interacts with other lines of code in ways that are difficult to predict.

No temple, no cathedral, no bridge or palace has ever contained as many interacting components.

Software is in many ways the craft of managing complexity.

Software is compliticated because it tries to model the irreducible complexity of the world.

Electronics have become largely generic, hese days it is software what makes a generic piece of hardware perform one function or another.

Think for example of a smartphone, it's a phone but it also is a calculator, a web browser and as many other things as there are apps for it.

That algorithms in the form of software systems are now running our whole world means that software faults or errors can send us down the wrong highway, deny resident status to someone, decide whether a person goes on parole and even cause disasters that kill and injure people.

It is for these reason that it is important to learn how things came to be this way, what has been done in different areas of knowledge to address this issues that exist at the interfaces between our worls and the world of automation.

Software is hard. It's harder than anything else I've ever had to do. — Donald Knuth, The Art of Computer Programming on writing TeX

Go further down the rabbit hole

Some talks on the topic

All code examples on the Fibonacci sequence are from Rosetta Code which is a great resource to learn more about ho programming languages compare.

Codebase visualization from Information is Beautiful, released in 2015.

The Programming languages family tree is from Exploring data